In Which We Actually Have to Discuss "Reality Television"... 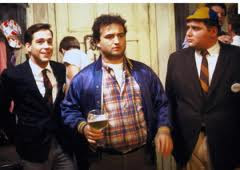 I would have liked to go my entire adult life without having to stoop to discuss "reality" television in any real seriousness. Class this morning focused on gender, gender identity, sexual orientation and ...almost the moment I started breaking down the variations in sexual orientation a woman raised her hand and made a long commentary about the "Real World".
I was more than a little aware of the story. It's been pretty well covered by gay-friendly entertainment blogs. (Heck, if we're to be honest, I used to have a subscription to the site he was on when I was in college...yes, I've seen the person in question naked in real time) If ever a story showcased both the casual affirmation of Kinsey 3's and 4's behaviorally, and the rigidity of the operationalization of sexual identity its this one.
Here's how sexual identity and societal expectations regarding both gender and sexuality can differ drastically. Dustin Zito is young, and apparently identifies as straight. At some point in his recent past, he did some modeling for FratMen- a site that cherry picks young, brawny "All-American*" college aged men to leer and pose suggestively and exude virility and hyper-masculinity (otherwise known as pseudo-"heterosexuality") while at the same time winking and posing for the objectifying gay male gaze at a rather expensive membership charge.
(*read-ambiguously European/"White"-a definite conversation for another post) Essentially, to pander to the archetypal fratboy motif.
This eventually morphed into a webcam centric website where scores of the guys would move to a building and basically fulfill vaugely homo erotic fantasies for the viewership- the lionshare of whom were likely male and identify as gay-which proved to be very marketable despite its softcore tease approach and the coyness with which all of its "actors" presented their sexualities. The professed sexual identities of the participants ranged from the staunchly heterosexual whilst playing around with a more mailable "boys will be boys" wink and flex. And its much this way with the sexual identities of "gay for pay" sex workers; many of whom identify as heterosexual in their personal lives whilst being behaviorally "gay" in their semi-professional one. Its a particularly old story when it comes to profitability and porn, but it speaks a great deal to the variation that exists within ranges of sexual behavior and the operational definitions that we so imperfectly use to define them. This all dovetails nicely with the now timeless Kinsey research, as most people tend to fall in the central limit of the bell curve distribution regarding their sexual reality and merely conform to the social expectations about the sexual identity they've adopted beyond that. In other words, what people do when it comes to sexual experiences and attractions and what people SAY they do, vary wildly. This is rooted in stigma and the archly homophobic social controls that sanction even the merest indication of same sex attraction, but the effects provide a profound and troubling distortion in cultural behavior and identity.
Cut to now, while the Real World, the "reality" show that started it all, indelicately stumbles its way through this incredibly complex social issue. It doesn't help that, Zito, perhaps as uncomfortable with his understanding of his own sexual identity, internalizes and displays when confronted about the prospect of having an openly gay roommate on camera open and abject homophobia. Those of us who were both familiar with the "character" Zito was during his time with Fratpad and the "role" he's taken on while on the Real World were somewhat expectant of a "bisexual horror show". The anxiety and societal discomfort brought to bare on men who express the merest deviation from the presumption of masculinity can be searing in its intensity, but for a man who identifies as straight to admit to having had sexual contact with other men- for money- and then to present himself as heterosexual in our society a difficult pill to swallow.
In my experience, both sides of the Kinsey curve seem to reject the notion that bisexuals exist in earnest, or more aptly that people transition from attraction and relationships both of a sexual and an interpersonal nature from one gender to the other. So much so, that our culture tends to force the duality of adult sexuality as though its inherently inflexible. The lines in the sand are so fixed and associated so rigidly so early that we clutch our pearls when boys aged 5 paint their toenails pink. A lot of this is, as I've alluded to in other posts on the subject, rooted in the cold war propaganda wars that reinforced such hyper-conformity. The result on the individual is the sort of ineternalized self loathing, externalized homophobia and general purpose repression and denial so oddly showcased here. Zito confessed before others "outted" him that he was uncomfortable around gay people and alluded to them being predatory.
The result on the other "castmembers" seems to be outright and blatant homophobia. The girl he was seeing feels "betrayed" and questions whether she should be tested. The rest of the cast seems oddly insistant that his omissions are more damaging and egregious than they are. If we removed the specter of homosexual sex from this senario, would Zito suffer any stigma for incidental sex on camera for money? Likely not enough for people to feel "betrayed" by his not telling them sooner.
More amusingly, I don't find much difference in the "whoring" any of he and his fellow cast mates are doing on the Real World: Las Vegas compared to what he was doing..."showcasing" himself in underwear in a different house in LA. Both cases involve opportunistic, attention seekers looking for their next big break. And while the Real World cast seemed scandalized about the prospect of male/male sex, the next week's preview was all about two hawt girls making out. Ahhh, the mind boggles.
On a less bizarro-land note: Ra Ra Riot's newest album "the Orchard" is to die for. That is all.
Posted by g_whiz at 3:15 PM

Email ThisBlogThis!Share to TwitterShare to FacebookShare to Pinterest
Labels: gender and sexuality, homophobia, Not Safe For Work(ish), real world, this is me not getting it