When We Say "Job Creation" What We Mean is... 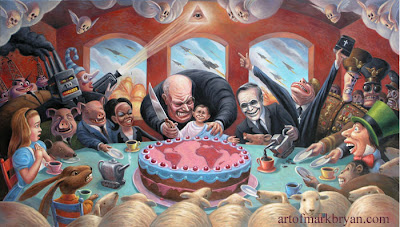 I find it harder and harder still to find a Tea Party candidate who got into office on this "we're only interested in fiscal reform" platform actually doing much remotely concerned with the reviving the economy. When they're not hawkishly slashing prices? They're of course dutifully defunding NPR, waging wars against Planned Parenthood...which, according to Senator Kyl Falsely (which is a bit ironic when dealing with misleading statements THIS egregious) apparently is responsible for 90 percent of the abortions in the universe...or something. In short, its simply an out and out falsehood- there are even pie charts to underscore how overestimated this statement is (by 87% for those of you with math anxiety). But I suppose such a flagrant lack of concern with truth doesn't really concern most.
Beyond the increasingly obvious ruse of "create jobs and fix the budget" posturing lays one more "faith based" slight of hand after the next. I'm curious about the rationalizations that'll come about how this is relevant to either job creation or the budget... because as we've learned about "Tax Cuts for All" ...there's always a price to pay, and its usually on the backs of the ever-eroding middle class.
From Think Progress:

"Hey, here's a way to defend marriage, help all those unemployed spouses out there get a job. From AMERICAblog Gay we learn that the Republican chairing the hearing wants to impeach Obama (so what else is new?):

Rep. Trent Franks (R-Ariz.), chair of the committee, has said President Obama could be impeached for his decision to drop his administration's defense of the Defense of Marriage Act in court, and the upcoming hearing would likely represent his views.

In a March interview with Think Progress, Franks said he supports defunding the Justice Department if it doesn’t defend DOMA and added he would “absolutely” favor impeaching Obama and U.S. Attorney General Eric Holder if support for doing so “could gain collective support.”

Well, he's going to have to impeach a lot of other presidents, including GW Bush, and Reagan posthumously, because they did the same thing Obama did. The lies these guys spin. Just amazing."

Also for your listening enjoyment, the ever cute and clever Foals "This Orient". It might sweeten our collective moods after swallowing that sour pill.
Posted by g_whiz at 7:41 PM

Email ThisBlogThis!Share to TwitterShare to FacebookShare to Pinterest
Labels: Music, Politics, Tea Party misdirects, this is me not getting it, You Fail Logic Forever