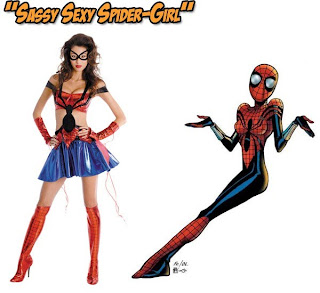 T-minus two days until costume party hijinks are to ensue...and I find myself still having persistent costume anxiety. I made the case for the angst that the lack of african-american superheroes and video game characters has caused my meager options...but after looking around the interweb and some costume shops at sexed up costumes the average woman is supposed to wear, I'm going to stop complaining.

In a world where most legitimate female superheroes are gender analogues of pre-existing male characters (which makes an interesting statement about the patriarchy in itself), and with the exception of Wonder Woman, many of the heroines of the X-Men, and the Invisible Woman (formerly the passive Invisible Girl whose power was to ...literally and metaphorically turn invisible) its only slightly annoying that so many costumes for women and girls are simply those male costumes in a mini-skirt and their tits out. Case in point: I've always been slightly amused at the sudden existence and popularity of jailbait Wolverine clone (literally) X-23. You know why X-23's so popular? Because it gives all the het-dudes who have jones for wolverine an underage, fetish gear wear

ing female to project that onto.

There are points where playing up sex appeal is entirely appropriate, but simply slashing parts of a costume, slapping on a skirt and high boots and glitter isn't as much about the costume as it is about the sexualization of the woman wearing it.


A lot of my friends who are women enjoy the gore of Halloween more than my male friends. Dressing up as puss oozing zombie people, sans-sexualization, is often their angle during Halloween, but when every other woman is a "sassy nun", or a "sexy bee" or... Sarah Palin, its conspicuous to be the woman in the giant furry costume, or the flesh eating zombie dripping blood. You can glance through a costume catalogue and glean a lot about gender expectations in our society. Male costumes paying homage to a particular character or person are a straight interpretation of said character whereas the female costume is not as much a feminization as it is a sexualization of the same costume.

One of the best aspects of Halloween (from someone who has always been somewhat leery of the holiday) is the irreverence, the subversion of "normal" societal expectations, and the ability-for just a night or a weekend- to turn convention on its ear. This assumption of mine seems to fail when we look at the staunch differences in presentation and expectation about gender in Halloween costumes. Whats the message when your 15 year old niece has being a "sexy bee" to look forward to, while her brother gets to actually BE a bumblebee. I'm dubious about whether or not focusing on the sexed up aspects of womanhood for even the most benign costumes is justified or even relevant. If a person wants to parade about in a corset for Halloween for the sake of it, it seems the spirit of the time...but to have the dearth of costumes aimed at women be these hypersexualized deviations of male costumes sends a very different, and not altogether encouraging message about gender differences when it comes to presentation. And as much as I like Sesame Street..."Sassy Elmo" makes me want to bang my head against the nearest wall repeatedly...


And now? Super sweet clips from my new favorite band Geographer, a lovely, lilting "Original Sin", and a poppy-yet melancholy number from Prozakk below. Dig it.

Email ThisBlogThis!Share to TwitterShare to FacebookShare to Pinterest
Labels: gender and sexuality, halloween, this is me not getting it