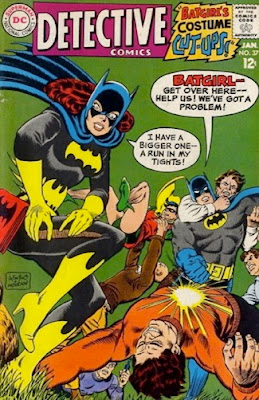 It appears that the burning question in all of mainstream comicdom has (thankfully) become "are comic books sexist?". Granted asking this question is incredibly valid, as all male dominated and male geared industries need to honestly evaluate such questions...but I wonder if this self-consciousness is a bit late in the day.

One doesn't have to do much digging to find evidence of how women are depicted in comics, especially in the 90s  (otherwise known as the dark age of comic books). This was the age of the super heroine "bad girl", oversexed, little in the way of characterization, even less in the way of clothing. Believe me when I tell you the costumes get more and more stripperific.  Use cases in point like Witchblade, Lady Death, Psylocke and well...you can see the point. Why would a woman or girl find exhibit A heroic in the slightest? Many a new reader looking at superhero comics assumes that all women have the most common superpower.


Predating the 90s, heroines were very rarely heroic in their own rights. Often female analouges of male heroes- Batgirl, Spider Woman, Ms. Marvel, She-Hulk  and Super Girl are all heroines that act as understudies to a male lead, or had origins that were caused by or due to the fact that their male counterparts got involved. ( I go into more detail on this in relation to the women of the X-Men comic and how they differ from this trend in an earlier post. )

Recent revamps of older heroines have at best revived the debate over sexism in comic book media. The sex forward depiction of Catwoman in her new ongoing has raised some legitimate concern. Judd Winnick is usually surrounded by some controversy or other, and typically I find him to be a likable writer. Where this fails the sexism test is not in that the female lead is depicted as weak or incompetent or inferior. Its how she's depicted that creates the problem. Panel after panel display confident cat buglar Selina Kyle half dressed showing off her torso. Its the amount of time we watch women who are supposed to be powerful parade around half naked, (even the critically acclaimed Batwoman title is guilty of this) we're being told about their capabilities while we get a cheap thrill out of the eye candy. Men are very very rarely displayed this way in any visual media.

I've read the justification that men are just as idealized in body type in comic books, and while this argument works initially, if men were to be depicted as sexual and not powerful at the same time we'd have true equality in objectification (which I'd like to point out is something that no feminist is arguing for).

Laura Hudson of the kick ass Comics Alliance tackles this multifaceted problem of comic book sexism perfectly. There is a very real difference between being sexually empowered and being sexualized. The bulk of what Hudson claims is valid, expressly because at the end of the day it isn't about the character. Its about the audience, writer and the artist and what they want, and expect the woman in question to be doing (appealing to them as heterosexual men).Its female characters pandering to male expectations and the "male gaze"  , as the writing and illustration is aimed squarely at women from a decidedly male perspective. Objectifying and yes, sexist as its all said and done.

As for the Starfire in the Red Hood and the Outlaws story..... its just plain embarrassing. Starfire's earliest characterization was as an alien who found Earth customs and hangups about sexuality and sex quaint and regressive. Fastforward to the DC New 52 reboot and Starfire might look similar...but its clear that looks are pretty much all we're getting here. Whats more interesting is that the criticism is being treated as some sort of ratings success by DC comics...which indicates some marketing disconnect about what we're really talking about here. Its not that sex, or more aptly depicting women as sexual objects, does not sell because clearly that a tale as old as time.

Depicting formerly fleshed out characters as nymphos who are interested solely in sex does nothing to further the story or explain any aspect of the character. Its fanservice.Showing "powerful" women bouncing about while men comment and basically benefit/get off on it is hardly powerful.

Its a rare thing to have super-heroines exist as self made women, and a newer trend to actually have female readerships/writers and editors be considered and counted. The claim that comic books are the quintessential boys club, as it is a genre that at one point was aimed predominantly at young boys and adolescents is an unfortunately valid one. The fact that the comic book community is beginning to ask these questions and study the depictions of women (and gays and other minorities) is a very curious and hopefully positive step.

For those of you interested in a woman's perspective on the comic book industry, Newsarama has been doing a great job with the PRO-GIRLS features on female characters and writers. the 4th installment deals with "Superheroes and Sexism" and is worthy of your consideration.