Comicsalliance has quickly become one of my favorite places to go for alternative takes on comic book news. It not only has some gorgeous art by indie artists, and clever re-interpretations of some of the more mindbogglingly dense comic book continuities. 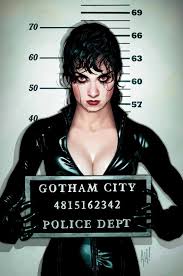 Lately, a writer (Laura Hudson, whom Ive developed a lot of respect for) has been raising the occasional question about gender/sexism and  the comic book industry. Valid questions about whether the depiction of female characters in popular culture as written by, drawn by, and consumed (presumably) men can come off as objects instead of characters...and proceeds to shed light on a lot of evidence why this might be.

An earlier commentary on Catwoman, who is often described as a woman who is "sex positive" and a "femme fatale"(I reference it here), debuted in a new DC comic where she spent numerous pages walking around in a bra being oggled by the p.o.v of the reader before we even see her face. Compartmentalization  and framed by her "t&a" before we get to finding out who we're talking about. Thats just one of the more popularized points of evidence indicating recent sexism in comics that've come out of the dialog.

Fast forward to October 20th, where CA posted an article referencing popular game blog Kotaku's noting that playing the new Batman game as Catwoman involved a whole new "game mechanic". And while it might not be as overt as some as the other above references, it speaks to some glaring problems with the way we deal with "slut shaming" and casual reinforcement of the status quo.


The (what I believe to be initial) Kotaku post by Kirk Hamilton on "Arkham City's Weird Bitch Fixation"-does a good job providing a few asides that indicate there could be something a bit off. Nothing more. Comics Alliance took this and added a few thoughts, reposted and joined another commentary from another blog that had noticed something similar.

All three articles/commentaries reference the fact that  they think Batman-Arkham City is one of the best games of its kind and the writers really enjoy it, but that the number of times the gossipy thugs you can almost always overhear as you move around Gotham tend to lapse into dialog about Catwoman, Harley Quinn (but less so Poison Ivy) while commenting on how they're "bitches". Bordering on excessiveness. They note it as a minor quibble and pose the question to the readers if they'd noticed it too.

Simple, benign statement of an observation by a few writers that expound slightly on the situation and likely go back to playing the game. Except that the responses to "Hey, maybe the female lead of the game is getting called a bitch an awful lot. There might be something of a tonal problem  to that." on the Comics Alliance thread have taken on a bizarre and infuriating position of "slut shaming is okay in the following contexts" and... allow me to point out a few of the hollow justifications put forth in order to silence the merest suggestion that the game they like can't possibly have negative implications!!! Here are a few of the larger "rebuttals" I've seen (Fair warning, empty, hollow justifications and point missing ensue):


1.) Its a Batman game where all the main characters are prison inmates and psychopaths. Its in character for characters like that to have no respect for society or women. Its "In Context", so stop complaining!

And yes, while it is true it is in character for lowlife thugs to be misogynistic, it does not follow that a woman merely discussing how this might make a game less enjoyable or might be something to consider, as swinging around the city as a butt kicking, sexy cat burglar and being called a "bitch" dozens of times does say something is wrong or controversial. But so many of the comments in the CA thread seem aimed at shutting down the discussion, based on "Oh man, you're whining about characters in a prison." Some made a hamfisted analogy of it being similar to whining about Schlinders list having  Nazis being anti-semetic...but this "in context" argument proves an interesting point. Because its in context means that these guys aren't interested in even hearing the discussion of how the word "bitch" is used to disempower. They're not interested in having the dialog about how Schlinders List has Nazis that systematically conducted genocide and why that might be worth discussing. They're intellectually lazy and so invested in shutting down the rather neutral question raised that they'll casually reinforce that being called a bitch shouldn't be as big a "problem" as its being made into... under some contexts.


2.) "I (or  Some women) don't have a problem with the word in question so this is pointless and a waste of time. Its just a word. Get over it."

Perhaps one of the most intellectually vapid responses to the impact of language and the meaning of slurs, is that suggesting that the connotation of words designed to stigmatize and dis-empower a marginalized group is the responsibility of the group that is demeaned to manage. "Its just a word. Its your responsibility not to be bothered by it." takes the onus of responsibility off the speaker to manage what he or she says in public and puts the responsibility of "making a big deal" out of social issues like race and gender and sexual orientation that are in fact considered big deals.

Its such a mean spirited ruse to use words like the N-bomb as a way to indicate cultural disdain for a group of people by way of the definition of the word...then say that some people of the group are "okay with" and use it, so now you have to too. My grandparents and parents spent their lifetimes trying to distance themselves from what the word meant when bigoted people used it to cut them down to size and indicate how little they thought of them, and because some 19 year old kid throws it around in a song on BET, thats all invalid? There's more than one black person and more than one perspective on how to feel about a centuries old word that has a negative connotation. Because some woman internalizes the word "bitch" differently than the writer does not mean that anyone else has to simply "Get over it." Its an interesting indication that people who are not affected by such words will forever attempt to try to control how you feel about them. "I don't care about this, so I don't want to hear about why you do." , is perhaps the most cynical and despicable line of logic ever generated.

It speaks to privilege in ways that is so arrogant and so flippant and dismissive that its galling to consider too carefully. (We are taught to see racism, sexism and homophobia as "individual acts of meanness" and not socially embedded aspects of the overall culture.) The lengths those in the comments sections on all of the threads go to to defend calling a sexualized woman anti-hero a "bitch" , the lengths the comments sections go to stopping the conversation from even happening ("This again? Really?") and resenting a woman for bringing it up speaks volumes for how much privilege male comic book readers and gamers seem to have when it comes to discussing sexism. Its not an issue, for them, and they resent you making it one. Its making people who are impacted negatively by minority status seem hysterically blind for voicing concerns about how that status is treated by others, and there's no cheaper, more repugnant trick.


3.) "Its not the worst thing you can call a woman so you should be thankful!"


The problem is that instead of having a conversation about how the few women in a game tend to be referred to disparagingly (yes, by low class criminals) has real world implications. As does all media and literature and fiction...its quickly devolved into a creepy justification of all the reasons why people believe sexism is okay, or  what contexts its okay in, or why people who talk about it are not okay. If the majority of the arguments for why Catwoman being called a bitch didn't have to do with her being a woman with a checkered past (i.e- slut shaming) , or the guys being jerks and that being okay in a game (for some reason), we'd have convincing arguments to make about the nature of sexism and why this discussion even happened in the first place...instead, lets justify it and try to make it go away. Because we're stupid like that and getting past social problems is only for people who think/care. Do we really want to be people that say "it really doesnt matter to me...so I'm annoyed that it matters to you?"
Posted by g_whiz at 9:46 AM