I'm going to attempt to find the words for how much I resent Herman Cain's established role black conservative translator/striker for the Republican party. He uses race as an issue when it suits his campaign; "Obama has never been part of the black experience", at the same time insisting that racism is by and large a thing of the past. 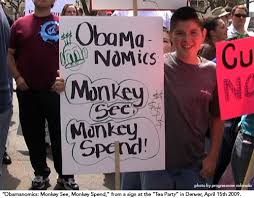 Several aspects of this unique position Cain puts himself in are problematic. Cain in numerous cases has decried the African American voting public as "brainwashed" for both voting Obama in the last election to leaning Democratic in general. He's reasserted time and time again that the Tea Party isn't racist, but he's falling into the same trap they do when discussing or criticizing the President- instead of valid criticisms of his policy or his direct actions...scrutinize his ancestry. Obviously the Republican base has an axe to grind about liberal policy, but yet we scarcely hear these criticisms over the din of commentary about BHO's racial component. When a number of Republican campaign tactics are steeped in xenophobia (sharia law?! Oh noes!) , wedge issues and general purpose animus towards the out group, it seems particularly wrongheaded to assert that is not a component of the party that thrived upon the Southern Strategy.

Unsurprisingly, this has endeared him to the base, which has long held suspicions that black people were whining about racism, and generally lazy and feckless. Cain stands out as the great exception to this rule, and the fact that he can make this claim confirms these beliefs and lets the overwhelmingly white audience off the hook for holding them. For this, following the Obama/McCain election, the Republican party will embrace Cain, while still comfortably thumbing their noses at the minority group he claims only to differentiate himself from the rest. His role as the buffer against scrutiny regarding racism makes him invaluable. So much so, they'll  gladly hold up affluent conservative black people while reviling affluent liberal blacks all the while. The cognitive dissonance is so massive its staggering, and yet the complexities of race and American culture are such that its business as usual.
Posted by g_whiz at 4:37 PM