How Not to be a Douchebag- Ideal Types and Covert "Isms" 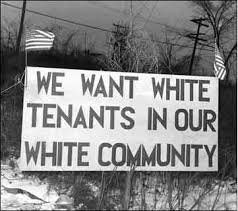 Now there's a relief. I was beginning to wonder if it was just me... One of the most persistent experiences I've had with online "meet up" sites, and hipster havens like OkCupid is overt and covert racism, biases and disdain generally being wrapped up with a tiny bow and conflated with "preference".

The negative language so prevalent on Craigslist and Grindr seems to signal that the culture of sexual liberation has been replaced by sexual segregation.

Gay sexual oppression is catalogued painfully on the Douchebags of Grindr blog, which sorts prejudiced profiles based on everything from racism and sexism to self-hating homophobia. But even though we see it everywhere, most people are as willing to admit to the exclusionary aspects of their desires as Lindsay Lohan is to submit to drug testing — statements are qualified by “Sorry, that’s just what I’m into” or “No hard feelings, it’s just my preference.”

Sycamore says that while people have the right to say what they’re attracted to, they have a responsibility to watch how they say it. “On the one hand, people are stating their preference, but on the other, these are not neutral terms. If we were living in a culture where everything was the same, it wouldn’t be a problem. But when sexual preference reinforces dominant systems of power in an unquestioning way, that’s when it becomes problematic.”


Sociologically, there's so much to unpack with these articles and the trends on sites such as these that it'll take more than these few posts criticizing them to do it justice. People (as the comments section in the article suggest) are very quick to defend their preferences and biases, and in this case very quick to feel defensive about having them called out on the proverbial carpet, or scrutinized in any way. Its one of the most glaring aspects of simply accepting the cultural status quo. We take for granted the big why behind gender conformity and racial realities and class inequalities and just accept them as the "way things are" without any critical thinking applied whatsoever.

The easiest way to consider/quantify what we're witnessing here is though the frame of dominant culture and ideal types.

Generations of barbie dolls and commercials have programmed the general public of the Western world to conform to a very specific understanding of what is desirable. Luckily there is a fair amount of variation, and what is considered attractive varies over time , but it does little to speak to the caustic ways our culture exports these expectations of ideal types without connecting to why they're there in the first place.

Looking at this from an individual perspective, to  suggest that while you're generally a very nice person, you feel AWFUL that you don't find a person attractive isn't as objectionable. To conflate that with all other persons that may ever share physical characteristics like them ("NO ASIANS EVER!!!")  is in fact racist, offensive and makes you look not only like a colossal douchebag, but like someone who finds that position so normal that its odd anyone would judge you for...judging others otherwise known as" preferring what you do".

At no point was the above article even suggesting that people cannot have preferences, its normal, and human to be attracted to qualities and characteristics. To assume that this is all biologically determined and racialized without considering the possibility that we as a culture prefer our ideal types for a reason is both false and intellectually lazy beyond reason. The groundbreaking research by Kenneth and Mamie Clark about racial preferences and ideal types in the "Doll Studies" that helped change conventional wisdom on "separate but equal" schooling and segregation underscores how our culture socializes us to prefer certain types of people to others, and make easy, casual generalizations about the entire groups they represent. This effect is so powerfully embedded within the dominant culture that when replicated today, the study has similar results (Ahhh that Anderson Cooper).

I could regale you with numerous personal experiences of how racial status has implied or dictated my lack of visibility and how often the typical "Oh sorry, I'm not into black guys" is more stinging and alienating than someone rejecting you for something that actually has something to do with you. Taking something as personal as attraction and making it purely about racial characteristics is in fact both mind numbingly biased and obliviously (willfully) disconnected from the reasons why.

No one is trying to dictate your "preferences", but the social fallout associated with having the posturing of borderline-racist (occasionally self loathing homophobic) profile declarations might put you on a website that points out the existence of such lousy human beings. Just don't be surprised that people might think less of you for it, when all you're putting out there is the equivalent of signs that belonged on water fountains in the Jim Crow south and expecting to be pandered to. Perhaps someday the social concepts that came along with it will stay there too.

Now hear this: The insanely dance-able "Punching in a Dream" by the insanely impressive Naked and Famous. Dig in.
Posted by g_whiz at 7:48 AM

Email ThisBlogThis!Share to TwitterShare to FacebookShare to Pinterest
Labels: covert racism, homophobia, how not to be a douchebag, Lets rethink this, th