Lock Out- Homophobia and Sports Culture 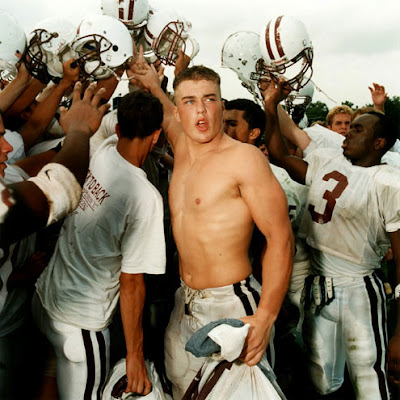 A few thoughts spring to mind when I read a study like this on College Sports and Gay Athletes:
(1.) I really miss doing social research from time to time- especially the really relevant things like peeling back the social complexity of homophobia in entrenched "hypermasculine" environments,
(2.) The internalized self loathing involved in some of these stories is staggeringly difficult to read about...to have been on the receiving end of it must be emotionally exhausting, I get why it would be safer to stay closeted for the entirety of one's career...but its inexcusable to put that sort of strain on people psychologically in the long term.
(3.) I really need to make a decision about what to do about school over the next month or so...burning the proverbial daylight.
(4.) I'm dubious about whether or not homophobia in sports is waining as much as the article suggests- I brought this up in class yesterday; or more aptly the scenario surrounding the Kobe Bryant "F-bomb" and the rationalizations were mixed and perplexing. Some students did the "he didn't mean the slur as a slur" rationalization, others , the "everybody in sports does it so it must be okay" argument, and still others the "people in the sub-culture (gay people) refer to themselves as f-bombs...if Kobe was gay would it matter?" *facepalm* We're going to have to reboot this discussion it seems...some of them are juuust on the verge of connecting to the idea that slurs and stigma have a purpose, and that purpose is fulfilled based on context.
I showed the group a few skits from the Chappelle Show, and am curious about whether or not they laugh AT or WITH the joke. Is the marginalized group "funny" or is it funny because racism is stupid? I'll update this as we revisit it in class tomorrow. Internalized self loathing seems a good place to begin. Fun times.
Some Sneaker Pimps to get the day going- "Low Place Like Home"
Posted by g_whiz at 8:12 AM