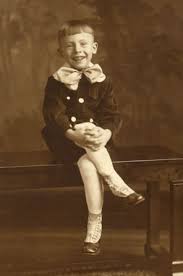 Box Turtle Bulletin » What Are Little Boys Made Of?
Above is some of the most impressive blog journalism I've ever seen related to a given piece.
Anderson Cooper has of late been making the rounds with a story, which by all accounts is a gripping, soul searing testament of how completely the idea of gender and its slightly murkier links to perceived sexual orientation can belabor and ruin the already arduous process that is coming of age. The Cooper story was broken initially by Box Turtle Bulletin, and in tandem both prove to be some amazing, damning evidence against homosexual "deprogramming" touted among the Christian Conservative set.
Every semester to date, when discussing the gender and sexuality chapters of Intro to Sociology, the topic without question veers to the very dicey topic of gender expression. "My four year old nephew likes the color pink...should I be worried?" "I once saw my son playing with his sister's doll, does that mean anything?" It feels as though every month or so we have a histrionic "gay panic" about some parent somewhere "making their 5 year old gay" by "allowing" their child to paint their toenails pink or play dress up, or wear a costume for Halloween.
What follows is usually a fairly profound unpacking of our societal misconceptions about gender and how it relates (or does not) to sexual orientation, and more importantly how socially constructed a given cultures ideas of masculinity and femininity are.
We live in a culture, post cold war conformity, that is still suffering from the hangovers of rigid gender expectation. All boys should like color X (or else something MAY be wrong with them), all girls should like the color Y (or something might be wrong with them). That something, post-McCarthyism was always the idea that gender non-conformity of any sort, the slightest "deviation" meant that your son might be a "sissy boy", much the way homosexuality was linked to such extreme deviance during the period that it was considered a national security risk to have any real or presumed homosexuals employed in a federal capacity. Being gay or even considered gay was so subversive that it was considered a danger to the very American way of life. Those ideas were popularized roughly a generation ago during a time of extreme social conformity, so it should come as no surprise that the original gay panic defense still has lingering implications as many years later.
What is problematic about this misconception is that one's sexuality, even when we're in our most formative years, learning the very socialized aspects of gender expectation- girls have long hair, wear dresses, pet kitties and play with dollies. Boys are "snakes and snails and puppy dogs tails", yadda yadda yadda. And what that fails to indicate, or even adequately express is the idea that sexuality and attraction are phenomena that exist outside of our gender identity/socialization.
As per the experiment referenced in both the Anderson Cooper and Box Turtle Bulletin links, there are several boys who conform to "appropriate" gender roles and still have same sex attractions, plenty of rugged military personnel that just so happen to like dudes. Sexuality does not perfectly dovetail with gender role behavior. If anything, what is evidenced by the extremely horrific results of the "sissy boy experiment" the infamous "ex-gay" reparative therapy guru George Reukers is that when we attach such caustic controls and expectations (i.e- conflating sexual orientation to gender behavior of a five year old) more damage can be done than good. Its utterly heartwrenching, the sort of hurt and trauma this experiment has caused the family the articles and expose touch on. And utterly criminal how people like the junk psychologist/therapist interviewed therein are allowed to further the falsehood that same sex attractions are something that can or should be essentially reprogrammed at God(tm)'s say so. The damage this does to the psyches of young people, living in fear of rejection and shunning based on whether or not their presentation of a given role is "convincing" (and not necessarily on their actual sexualities) is exponential in magnitude.
EDIT: Having just found this rather succinct meme from the APA on NARTH and the Focus on the Family fundies that perpetuate the ex-gay myth, I think the defense can rest safely enough.
Posted by g_whiz at 7:26 PM