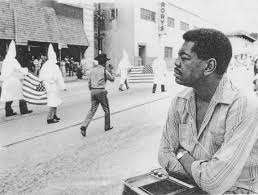 Counter-protesters confront Westboro Baptist Church at Arlington - CNN.com
Perhaps the apocalypse really IS a-coming, after all. Here we have the Klu Klutz Klan counter protesting the Westboro Baptist Church. Yes, one group has been historically the most repugnant blight on American culture (since...well, technically the Europeans landed and performed gradual genocide centuries ago), the other has through sheer mean spirited "fire and brimstone" spitefulness, made a name for itself protesting funerals of gay people, military soldiers, and anyone with a slightly elevated profile that may be somehow..."endorsing sin that deserves God's Fury". Or something. And they're FIGHTING each other!!!
Not since those rather ridiculous claymation Deathmatch epsidoes on MTV have I wanted to see an actual throwdown. To be fair, The Westboro Baptist Church finds that its NOT an abomination that needs to be protested at funerals to be black or female. Just gay. Or a soldier who happened to die at war. Which vaguely (though not actually) doesn't outright condemn the homosexual to death. So they're sinners too!!! (Or something). This is like if the Legion of Doom squared off against the Storm Troopers from Star Wars. Except, in reality, is slightly more jarring and a little pathetic.
Don't worry. My head hurts too.
Speaking of religious interpretation and big obnoxious overreactions. I'm posting the video to Lady Gaga's "Judas" which the Christian Anti-Defamation League called a bunch of foul things before either the song or the video were released. You KNOW you're controversial when you get pre-emptive pearl clutching...
Posted by g_whiz at 6:38 PM

Email ThisBlogThis!Share to TwitterShare to FacebookShare to Pinterest
Labels: mean spiritedness, super villians, this is me not getting it