Have You Tried...NOT Being a Mutant? 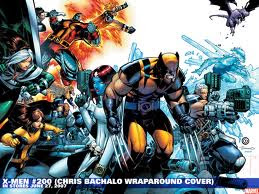 Say what you will about comic books as a medium (because I'm whistling while you do that and pretending you're cooler than you are), but there really are moments where, through use of metaphor, comic book story telling gets it right.
Case in point? Allow me to extol the virtues of Marvel Comics' X-Men franchise: The put upon minority you've all been socialized to "fear and hate" because they've got qualities that make them "different"- yeah, they saved the universe a few times while you weren't looking. They look great in spandex, have fascinating powers, tend to be beautiful, doomed and fabulous...oh wait, it sounds as though I'm describing Twilight. But yes, there's angst, intolerance and a lot of fighting killer robots while romantic quadrangles develop. There's a cast of hundreds (seriously, you'd think you were watching Game of Thones) and a wondrous Hogwarts for Mutants in which mutant children are trained for superhero greatness (or usually trained to avoid being killed immediately...which is a topic for another post altogether).
What other mediums not aimed purely at adults adress issues like racism, diversity, civil rights activism and clearly display how to rise above petty bigotry and contribute to the greater good? I couldn't think of any either.
What I find consistent about the X-Men brand, is that even when it descends into cliche- and any comic book series thats been around 50 odd years can fall prey to this- is as follows:
1.) Diversity training- Without a doubt, the X-Men are one of if not THE most longest running diverse super hero themed comic books of all time. Not only did Giant Size X-Men #1 remedy the cookie cutter white bread "All-American" rosters of the original 5 X-Men (and similarly the original Avengers, Justice League and so on and so on). The second group, under uber-writerChris Claremont , boasted a Canadian misanthrope, a blue skinned German acrobat, An Irish ex-con, a surly Native American, an even surlier Japanese man and a Kenyan Goddess. Granted, the "All New All Different"recruits (as written by Claremont) were guilty of some incredibly hokey and frankly cringe worthy stereotypical dialog. How else would we know that the big Russian guy was so if he didn't shout things like "By the White Wolf!!!" when he was surprised? How else were we to know that Nightcrawler was German without him sprinking "mein freund" after every sentence? (But the Ah's and Mahs of Sassy Southerner Rogue and hell, half of the things Irish born Banshee said were just wrongness given voice). Many of the characters developed considerable depth over time that extends well beyond the sub-cultural window dressing (such development varies depending on the writer), so the tone and the treatment of minority characters has greatly improved. Still, the X-Men are some of the only places to see minority characters of any stripe do anything of note continually.
Later incarnations of the X-Men boast openly gay french Canadians, Formerly "evil" nazi holocaust survivors and (interestingly but sadly underused) Muslim teens from Afghanistan.
This fits well with focal character Professor Charles Xavier -who is arguably an analog of MLK at least with his peaceful protest/activist approach to mutant rights- integration and co-existence to Magneto (Malcom X) 's "by any means necessary".

2.) Ladies First- Another boon to X-Comics many others cannot attest to is that while radioactive spiders and cosmic rays disproportionately grant men super powers, genetic mutation affects men and women equally. Therefore, there are scads of super powered, bad ass women in the X-Men, far more than most other super hero books. Storm has the distinction of being not only the first black woman to take a leadership role in a comic, as well as being the first black character to be prominently/regularly featured in a comic series. Suffice it to say that the number of important women in the X-mythos adds a great and needed balance to the bro-code many comic books seem to perpetuate.
Another interesting point here when it comes to gender inclusiveness, the X-Women tend to exist as characters in their own rights, full fledged heroines and identities that aren't analouges of male characters. (There's no She-Cyclops...though sadly, there is a she-verine) Ms. Marvel, She-Hulk and Spider-Woman? Feminized versions of male counterparts. Storm, Emma Frost and Rogue aren't characters that were reliant on other (patriarchal) forces to imbue them with power and purpose. Its an interesting theme that furthers the point of gender equality.
3.) Intolerance for Dummies- Mutants are openly, actively discriminated against. So much so that the government in many cases displays some fantastic racism towards this minority group. (Sure, lets sick homicidal robots on a school and see what happens!) To underscore this point, there was recently a story arc where legislation from a right leaning conservative group was pushed forward to attempt to ban mutants from procreating. It was called Proposition X. Note any real world similarities?
What makes this unique to the reader is that Mutants can be born from any social class, ethnic group, gender or orientation, making your average 14 year old's angst over having pimples and feeling misunderstood both poignant and welcome. Sure, it evidences worst case hypothetical intolerance scenarios, but it makes clear for the readership the constraints and consequences of blind hatred, and the costs of being part of a disenfranchised minority group. There's little more heroic than being the perpetual underdog, fighting to protect people who really would rather you "kept your power to yourself", or stayed away from normal people.
When you have "villains" who were victimized during childhood in concentration camps, and more aggressively seeking to protect those "normal" humans fear and persecute, it makes for compelling somewhat more complex motives when the "good guys" come to their aid...and still don't get any thanks for it. No good deed really does go unpunished when you're a mutant.
Beyond that, the metaphorical comparisons to LGBT rights ("Have you tried...not being a mutant?", and the sort of "passing" or "closeted" aspect of being "discovered to be a mutant") , as well as antisemitism, the 60s civil rights movements make the significance of being a mutant, and being quasi-heroic in the face of it all the more winning.
As far as those of you curious about a few great story arcs to guide you into X-Men reading, I'll suggest a few brilliant reads:
There are a plethora of storylines and character arcs that are worthy of honorable mention, and of course I'm merely touching the tip of the iceberg with my analysis here, but there's a lot of brilliance in these ideas and these characters. One of the underlying reasons I'm the left leaning, sociologically minded politico I am today is that X-Men comics adhered to my dormant worldview, taught me about inequality and moral fiber, the ability to be more than what people see of you, better than what they think of you, and do good despite the idea that they might not deserve it. Pretty good life lessons at the cost of a few dollars a month, I'd wager.
Posted by g_whiz at 10:30 AM