This is Rapture. (Video Games and Objectivism) 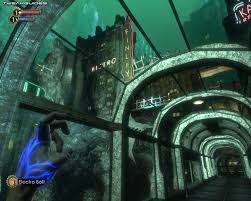 The affairs of men: Politics in games- Destructoid
An interesting piece from Destructoid on the role of political movements in video games. I clicked the link hoping they'd cover the use of objectivist political ideology in Bioshock and happily was not disappointed.
The author criticisizes the fact that Rapture is, upon the player's arrival, a dystopia. Where all the lassies-faire capitalism and self interest ultimately led to the fall of one of the most prosperous utopias in "existence". Rapture fell because corporate greed and personal interest in genetic splicing without checks and regulations so changed the otherwise brilliant population of thinkers, enterpeneurs and artists that they morphed gradually into homicidal maniacs. All of this socio-political intrigue painted against a backdrop of an undersea metropolis comprised of lavish art-deco stylings and steampunk trappings and made for a truly troubling, effecting atmosphere in which to explore the game's world.
Whether or not the story so artfully told in Bioshock's narritive is meant to be a cautionary tale, its narrative is one that is unique for both a first person shooter (which are so dime a dozen with their gritted teeth and space marines its slipped well past cliche) and a modern console game in that it creates a game atmosphere so steeped in story and so lavishly detailed that it is difficult to disconnect from it and "just shoot stuff" the way one would a Halo game. Rapture is a crumbling, yet fascinating world I found myself wondering about even while anxiously exploring its nooks and crannies, peopled with a majority of mad citizens its difficult not to pity as they shout incoherent jibberish and try to take your life. Very few of the characters encountered are even remotely sane by the time you stumble upon Rapture, very little of the city salvageable. And so many of the more fascinating characters display their ability to navigate the moral ambiguity of the world they've come to for profit and prestige.
Brigid Tennenbaum is one of the more (rare/sane) morally centered characters in the game. Contrast with the idea as a child in WWII concentration camps, she was introduced to genetics/science and found her calling (even if it was at the expense of others in the camps). Tenenbaum found a profitiable procedure that could allow for genetic augmentation, which came at a cost. And Rapture's children were ultimltely turned into soulless scavengers in the pursiut of ADAM, the genetic fuel which drove such augmentation. Her guilt and revulsion over what her research had done to otherwise innocent girls drove Dr. Tenenbaum to redeem herself by liberating the girls of their condition. It is here where the player gets confronted with one of many moral delimmas in the game. Liberate the innocent at a cost, or profit and become powerful and end the girls lives. Depending on how one internalizes objectivism, the player can just as easily exploit and benefit the way the figurehead who created Rapture envisioned. Saving the Little Sisters earns you their gratitude and the occasional assistance, but the game is notably more difficult sans the additional ADAM not sparing the children affords.
It of course speaks to my touchy feely politics that I could never bring myself to harvest the Little Sisters and was hobbled (somewhat) by it. Bioshock is successful because it connects the player to this ethical delimma- profit or protect but at a horrible cost. It dances with the idea that one can be a powerful self made man, on the backs of or at the expense of others, and dovetails some of the more unfortunate implications of this philosophy.
Many would in reality break with the idea of profit if it meant literally ending the life of an innocent child, but in the altered states of video gaming its a murkier and easier thought exercise to navigate. One Bioshock crafts exceedingly well. Sure, the people of Rapture are deranged, and the once gleaming city beneath the sea has become a tarnished fantasy, a failed scheme that the entirety of their culture has had to pay for with their sanity and lives- but its an incredibly thought provoking and meaningful game. The likes of which we rarely see amid all the plasma grenade launching gratuity of roided out Space Marines.
Below is just about the most hauntingly somber scores I've ever heard in a game. I used to choke up whenever it played during my first play through. Aptly named "Empty Houses" after the gorgeous ruined homes the increasingly mad abandoned.
Posted by g_whiz at 9:42 AM