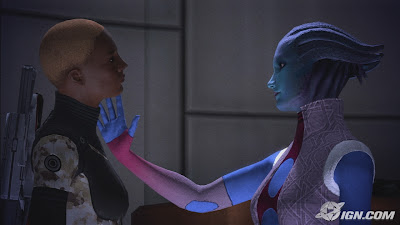 Ubergizmo Thinks Putting Gay Sex in Mass Effect 3 Will Harm Children | 2 Gays 1 Joystick
One would think the "concerned parents" could conceivably be objecting to Mass Effect would be doing so well before Bioware became more inclusive. Or at very least they should have been. If kids are playing games that are as wohdin rightly suggested are M for mature, their parents SHOULD be concerned. But including content like this (which might I add is about as racy as a benign prime time soap) is only a "problem" provided said parents are neglegent enough to allow their children to play it. Masking blatant homophobia behind the guise of handwringing worry for children is an amusing feint. If we condone or appreciate that a game has content that might appeal to a broader spectrum of players, it may in fact harm the children!
The subtext of arguments like this are often the most telling part.Nevermind that the regenerated futuristic space marine you play as can blow sentient beings up and court inter-species relationships...he or she can also now mack on guys or girls in his party, depending on the players preference. How this is any different from Bioware's other games and their forward thinking inclusive style over the past several years is lost on me. Its a very rational page from sci-fi writers that have the stones to think outside of the rigid confines of our limited culture. We immerse ourselves in fantasy worlds because the ones we live in are barren, restrictive, unwelcoming. So we fling ourselves into our minds eye, into futures where who we are isn't so reductive. Dr. Who's devil may care Captian Jack Harkness speaks to a this idea that sci-fi, especially science fiction taking place hundreds to thousands of years in the future would HOPEFULLY not have the laundry lists of hangups and stigmas that drive some in our culture to misery. Instead the likes of Harkness hail from a time period where our sexual rigidity is "quaint" at best. The way social change works, while arduously slow at times, does in fact mean that somwhere down the line, it will be a non-issue which romantic choices you have in a video game (I only wish it were sooner). It is not wrong to want to dream a world where the universe could conceivably be saved by a well trained, lauded soldier who just so happens to date guys. In the far flung future, let's hope there are bigger problems to keep us up at night than "protecting our imaginary children" from potential plot devices in games they shouldn't be playing in the first place. Horrific implications averted. Children saved. See you in Space, Cowboy.
Posted by g_whiz at 2:45 PM