The Lavender Scare Staggers On. 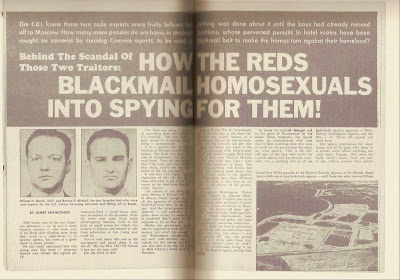 AMERICAblog Gay: ACLU: Obama DOJ equates gay servicemembers with drug addicts, alcoholics and those who are threat to nat’l security
Well, there's no positive way to spin this particular story, so I'll dispense with the pretense. The Obama administration is continuing a practice that flagrantly reinforces the idea that gay servicesmembers < straight servicemembers. So much so, that the DOD is furthering the oldest in the Cold War Era political assertions about homosexuality.
The gay as the national security risk.
Thats right. Tired, ill informed 1940s ideology about sexual orientation is still being used to make policy decisions. What we have here is servicemembers discharged under DADT suing for equal separation pay as their "counterparts" and the DOD insisting that the motivations for such discharges stand and ought to be valid. (As far as my legalese can intuit. Your mileage may vary)
AmericaBlog's John Aravosis and ACLU staff attorneys interpet it thusly:

The government’s decision to contest these claims is baffling. These honorably discharged veterans were forced out of the military under the unconstitutional and discriminatory ‘Don’t Ask, Don’t Tell’ policy, which is in the process of being repealed. All that these veterans are asking for is to receive the same separation pay that any other honorably discharged veteran would have received.It is outrageous to equate these service members with those who were discharged for threats to national security and drug abuse. The government’s treatment of these veterans is shameful and adds insult to injury.”

So here we have the DOD who is in some cases (with its interests in the gradually repealed DADT) backtracking and defending bits of policy established in the Armed Forces interestes in perpetuating the same "security test" lunacy that led to the witchhunts that fired scores of government employees on the off off posibility they were homosexuals. The Lavender Scare-Its a topic I found fascinatingly galling back in grad school considering the timeframe it took to even begin discussing gay rights equality on the public level...but this approach is altogether staggering in its regressiveness.
EDIT: A follow up report by John Aravosis on the topic.
Posted by g_whiz at 12:03 PM

Email ThisBlogThis!Share to TwitterShare to FacebookShare to Pinterest
Labels: gender and sexuality, Politics, this is me not getting it