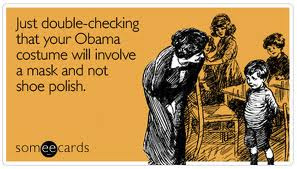 This is a brilliant article by JT Riley about American culture and polite society dealing with casual bigotry. Its an article and issue eriely resonant with my life experiences in sleepy college towns in rural North Carolina. I feel like half of my adult life has been spent arguing with southern baptists and aging parents and people who "don't know any better" about "well, you know". And it makes me tired all the time. A conversation for another time, however.

Reiley's sparring with his mother's friend (about "the Jews", "the gays" etc) reminded me of the alarm and disapointment I experienced last week at my cousin's wedding. It was a very afro-carribian "jump the broom" affair, and I was rather pleased at having decided to make the 9.5 hour drive to North Carolina to do so on the account of everyone looking so lovely and everything being just so. It had begun to rain, so the ceremony was cut short and we'd all gathered, roughly a hundred handsomely dressed black folks, dodging the rain in a gorgeous building off the park for the reception.

It was then I got cornered by my uncle, who by all accounts was the eccentric mildly-sociopathic blowhard of the family (I suspect I'm growing into my generation's version). I'd always operated under the assumption that he was a bit of a radical in his day and ultimately meant well.We started talking about the President, whom he feels isn't black enough for his tastes. This I immediatley bristled to, because as I always say when the topic veers to the idea that someone's idea of "blackness" makes everyone else be measured by this arbitrary standard (a box to unpack another time). Then he started defending Kadafi as though he has every right to opress people and deny them self-governance simply because he was "a brown man". Then he started in on "the Jews". I felt paniced. Why hadn't anyone ever TOLD me my uncle was an anti-semite?! Most people just rolled their eyes and nodded and sparred with him lightly, and being on the better end of the mason dixion line for such a long while, I'd never had the luxury of discovering this awkward truth.I steered the conversation from defamation and pointed out problems I had with the nation of Isreal's policies and practices towards Palestine; a topic safer only by degrees, I'm aware. I was blindsided, amazed that I couldn't have seen something like this coming, and disappointed that one of the most socially minded people in my family could get it so utterly wrong. I vowed to continue the conversation, but my father shot me a withering glare that told me it was futile. People ought to warn others when they're about to be cornered by unwitting monsters. We need to tie bells, or have some sort of early warning system (mauve alerts, maybe) to inform us of how to properly engage with people who are so desolatingly disconnected from the important work of living in the now.