Theocrats by Any Other Name. 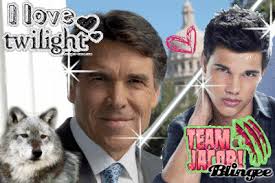 Joe. My. God.: Christians Only At TX Prayer Rally
The lesson? Don't imply your very public, very political "prayer rally" is all inclusive and multi-denominational when it in fact isn't. The glaring problem here....beyond the idea that a standing Governor's spokesman is using obnoxiously biased religious jargon like "Our One True God" and "the Way, the Truth, and the Life" in an official secular capacity, is that people in environments like this wouldn't know how to respectfully and inclusively hold a faith based function if their afterlives depended on it. The language here is a prime example of monotheistic arrogance:

Sure, we get it, big ol' Christian. The flowery if not mildly cliched rhetoric was the tell there. Whats interesting about the way religious freedom is supposed to work though, is that political figures are not supposed to implicitly endorse one religion over the other. Marketing an event as a Texan Prayer Event speaks to indicative bias on Perry's part, and now that I'm aware of what sort of evangelical Perry is I'm a little ponderous of how the GOP tends to put forward these grinning theocrats while passing them off as objective politicians. Ominous foreboding here.
*Unsurprisingly the event seems to be funded by the ever loving American Family Association, and Perry is being paid for his appearance. Want to bet who's going to be generously donating to his campaign (in exchange for ramping up anti-gay policy?)?
I know a greek old lady that disapproves.
Posted by g_whiz at 10:01 AM

Email ThisBlogThis!Share to TwitterShare to FacebookShare to Pinterest
Labels: how NOT to govern objectively, religion, secularism, Southern Discomfort