Shocking, I Know (WBC for the win?) 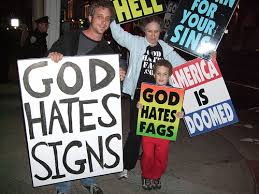 'via Blog this'
Anyone else blatantly not surprised here? The interesting thing about the Westboro Baptist Church is that their fire and brimstoning tends to alienate them from both the uber-tolerant and liberal and the more mainline socially conservative (Especially due to the "lets draw a parallel between a civilization that doesn't outright murder its homosexual population annnnnd tolerance" - which I'm unsure is a very valid association) , pretty much cementing their status as a counterculture nobody (even fundies like NOM and Michelle Bachmann) feel comfortable supporting publicly.
With the exception that teaching abject intolerance to your children is not doing them any favors (its hard to have a functional life as a member of the KKK and have to live/work around people who aren't part of your stunted world view for instance) , in a way the more press the WBC gets, the worse its brand of intolerance looks to mainstream America. So....You guys have fun with that protesting cultural events that mean something to people! (and fashion week)
Posted by g_whiz at 6:38 AM